Last Fall some of our first house projects were tree trimming.  The trees here hadn't been maintained for a long time and all needed quite a bit of trimming.  In particular the tree on the south side was growing into the house and so it lost a significant number of Big Branches.  As we trimmed (Corey's family helped so much with this!) we put everything into a big pile in the backyard and I had visions of having a giant bonfire towards the end of Fall.  This never happened and the big pile of branches sat all winter and spring.  As you might imagine, all the grass underneath died and we were left with an ugly patch of dirt amongst our grassy yard.

I figured we had two choices, sod or a garden.  Since we had the wedding coming up and the dirt patch was in prime view from the wedding tent I didn't want to wait for seed to grow.  Now buying sod is expensive and a hassle.  So I figured we should turn it into a garden and have this whole thing look intentional instead of accidental.  So Corey made the patch into a nice square and stopped by Home Depot on his way home from work and bought a bunch of started seedlings and two bags of compost.  And on one of my many trips to buy flowers I bought more started seedlings and spent way too much money on a cute little picket fence.

Corey did all of this because I had too many projects on my plate to add anymore.  I was thrilled to walk outside and find this cute little garden a week before the wedding: 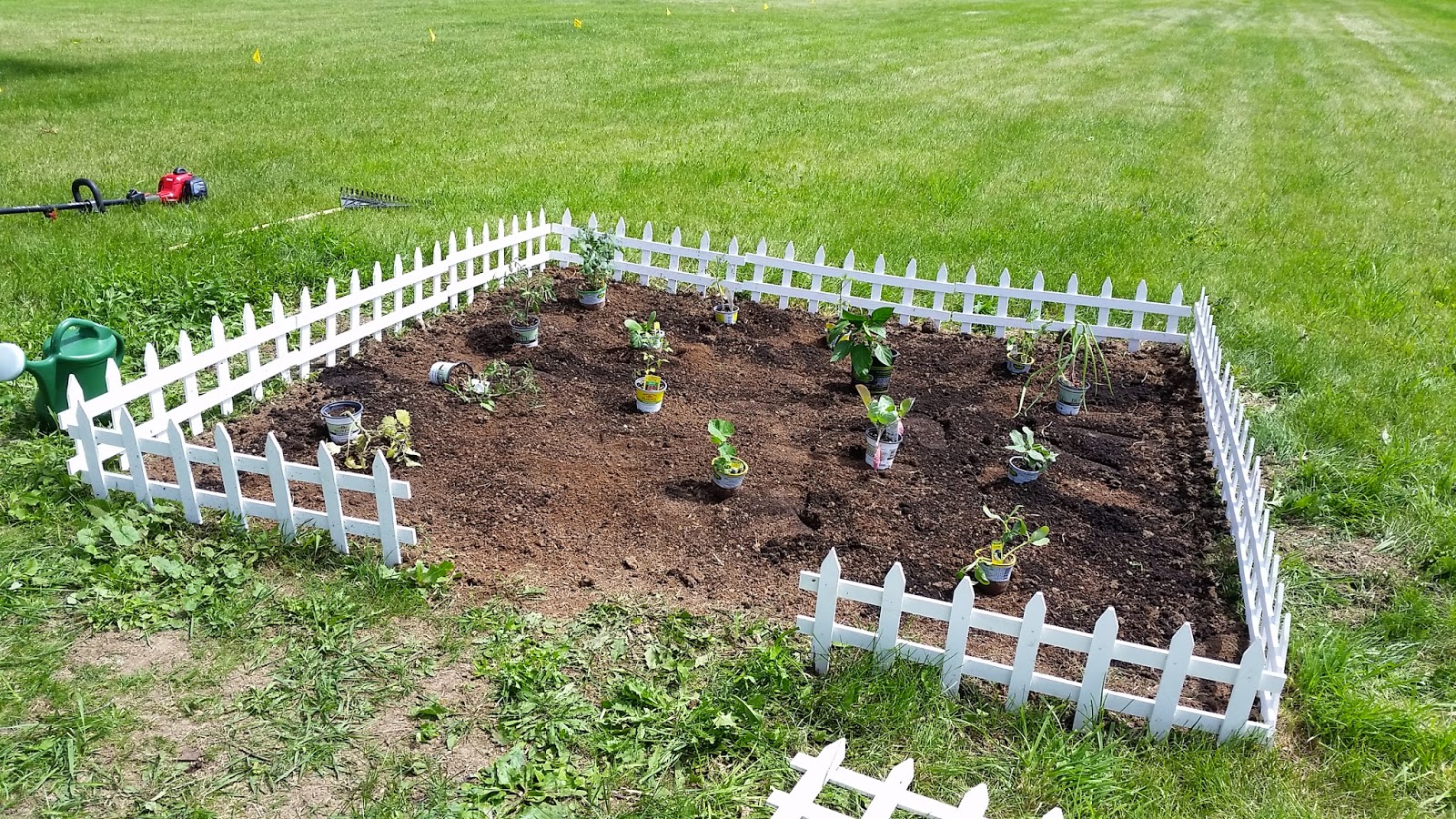 Corey broke up the dirt some and spread out two bags of compost to help the dirt along.  Then he spread everything out and planted.  He planted (I think) 5 tomato plants of varying sizes, 2 zucchini plants, 1 acorn squash, 1 butternut squash, 1 cucumber, 1 brussel sprout, 1 onion, and 1 pepper.

It looked nice for the wedding and I figured whatever food we got was a bonus.  We left for our almost 2 week long honeymoon and came back to an explosion.  Our parents came and watered a few times for us and that's about it.  No one even weeded!  And almost exactly one month later we had this: 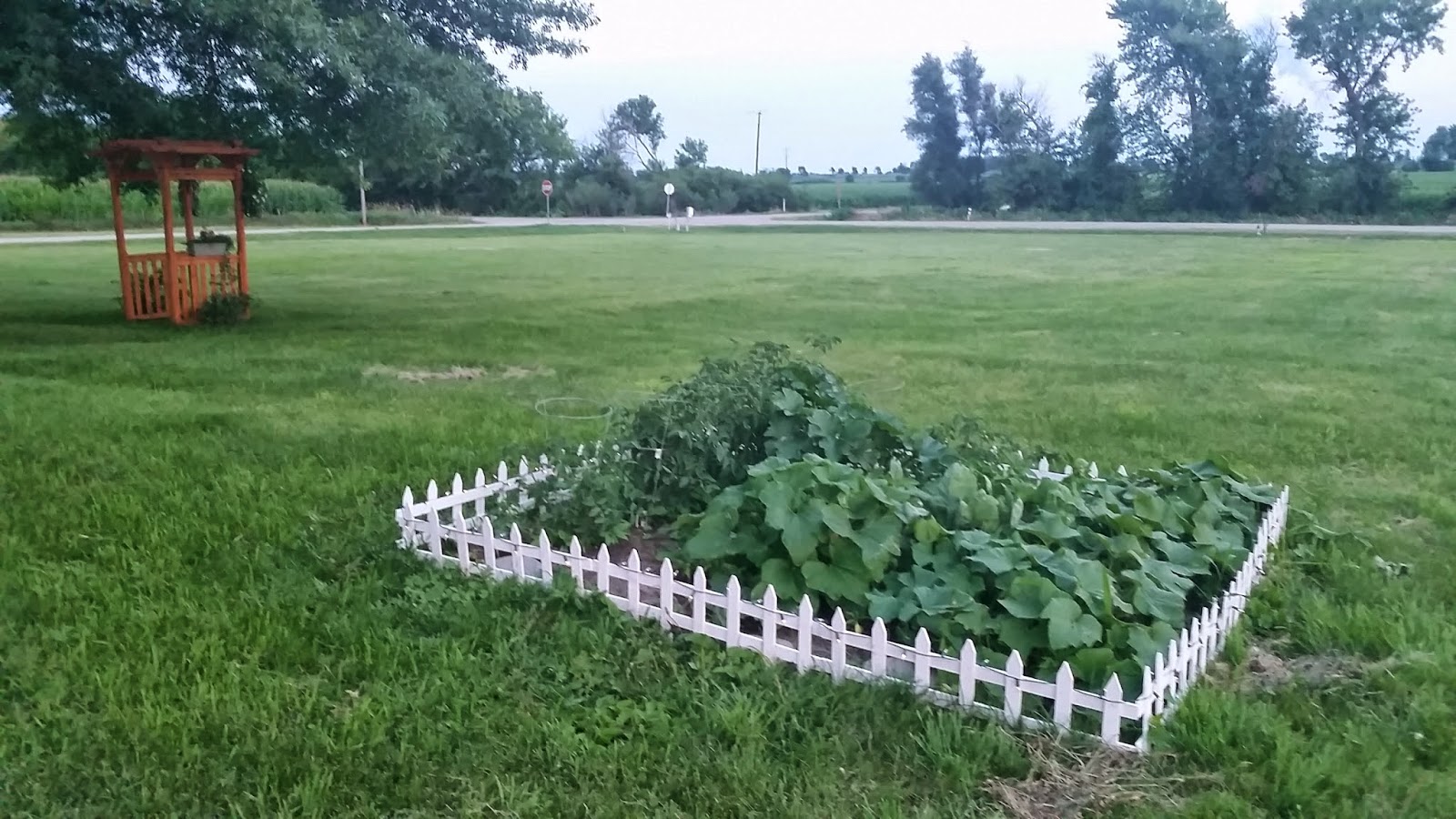 Can you believe that?  Way to go, dirt!  Almost everything took off.  The onion was kind of a flump, but that's it. 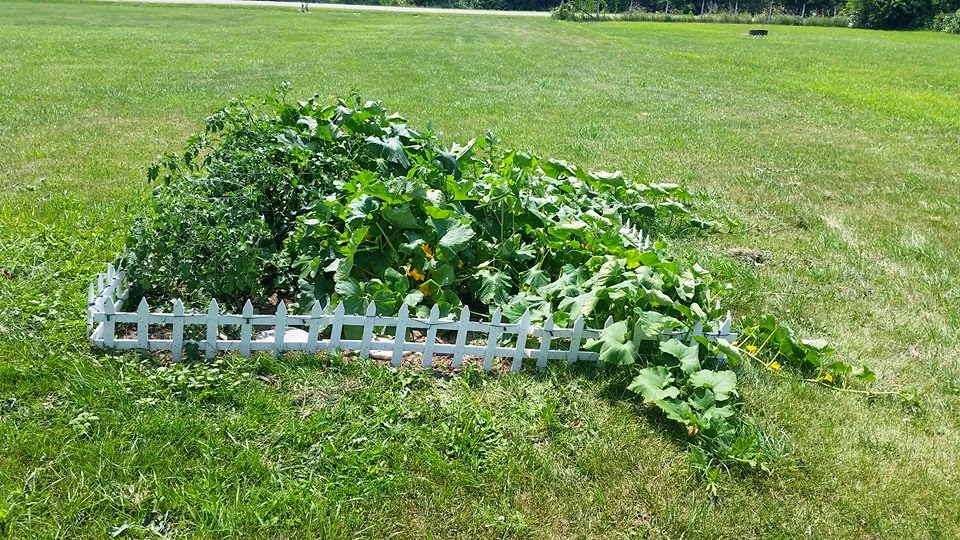 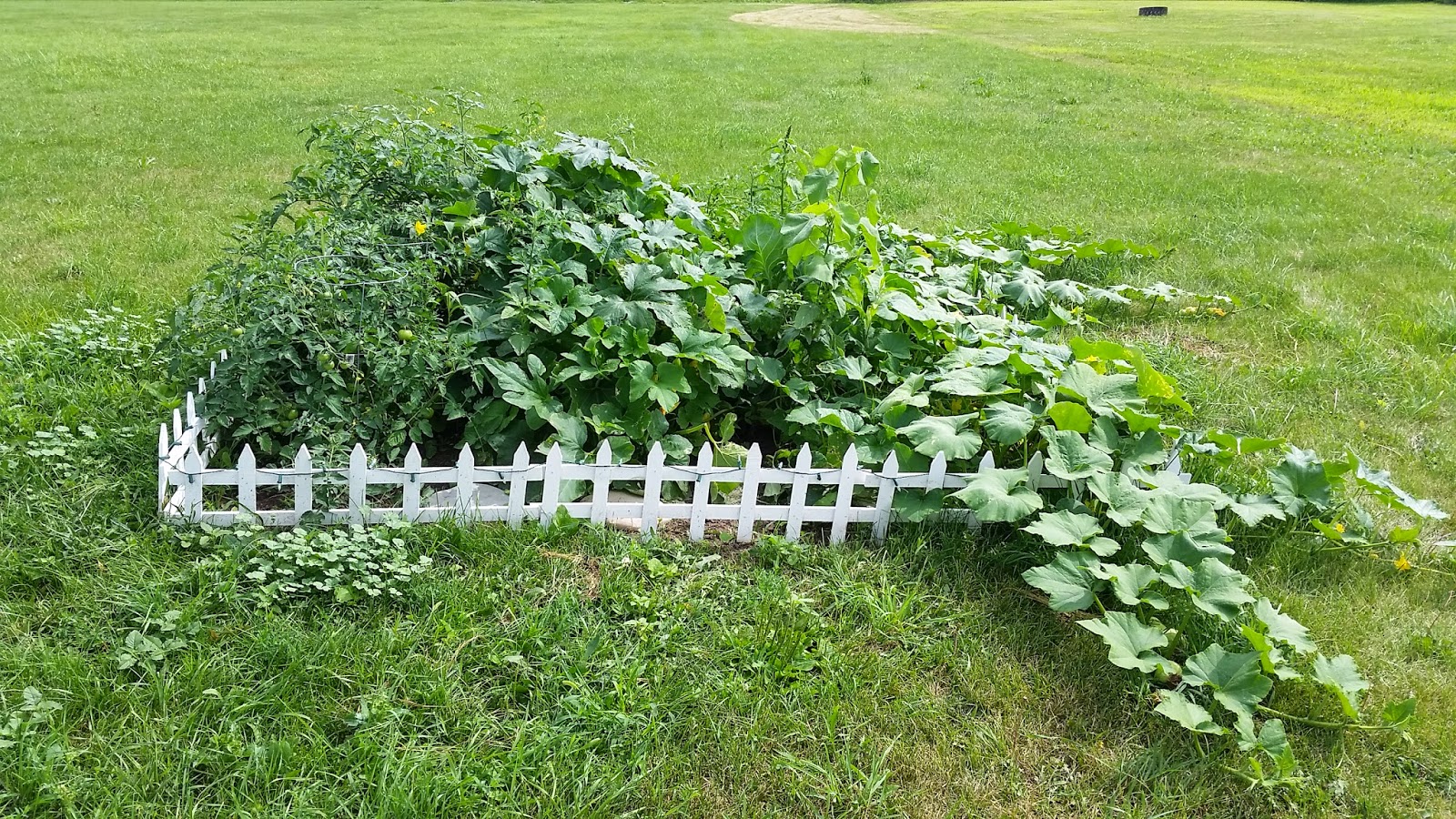 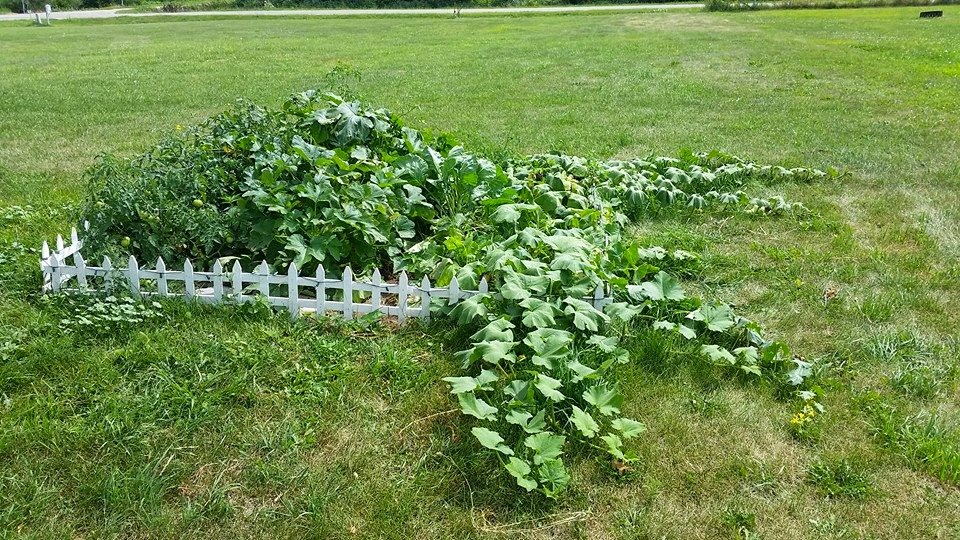 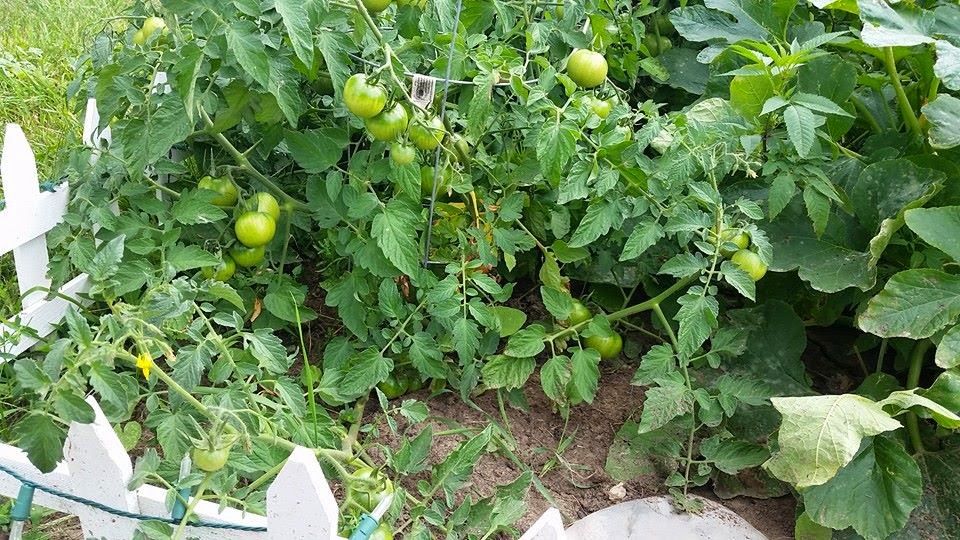 The peppers, cucumbers, zucchini, acorn squash, & heirloom tomatoes are done.  The grape & medium sized tomatoes are still producing.  The brussel sprouts haven't been harvested yet and there's a couple of butternut squashes left that I hope will ripen before the first frost.


And here are some harvest pictures: 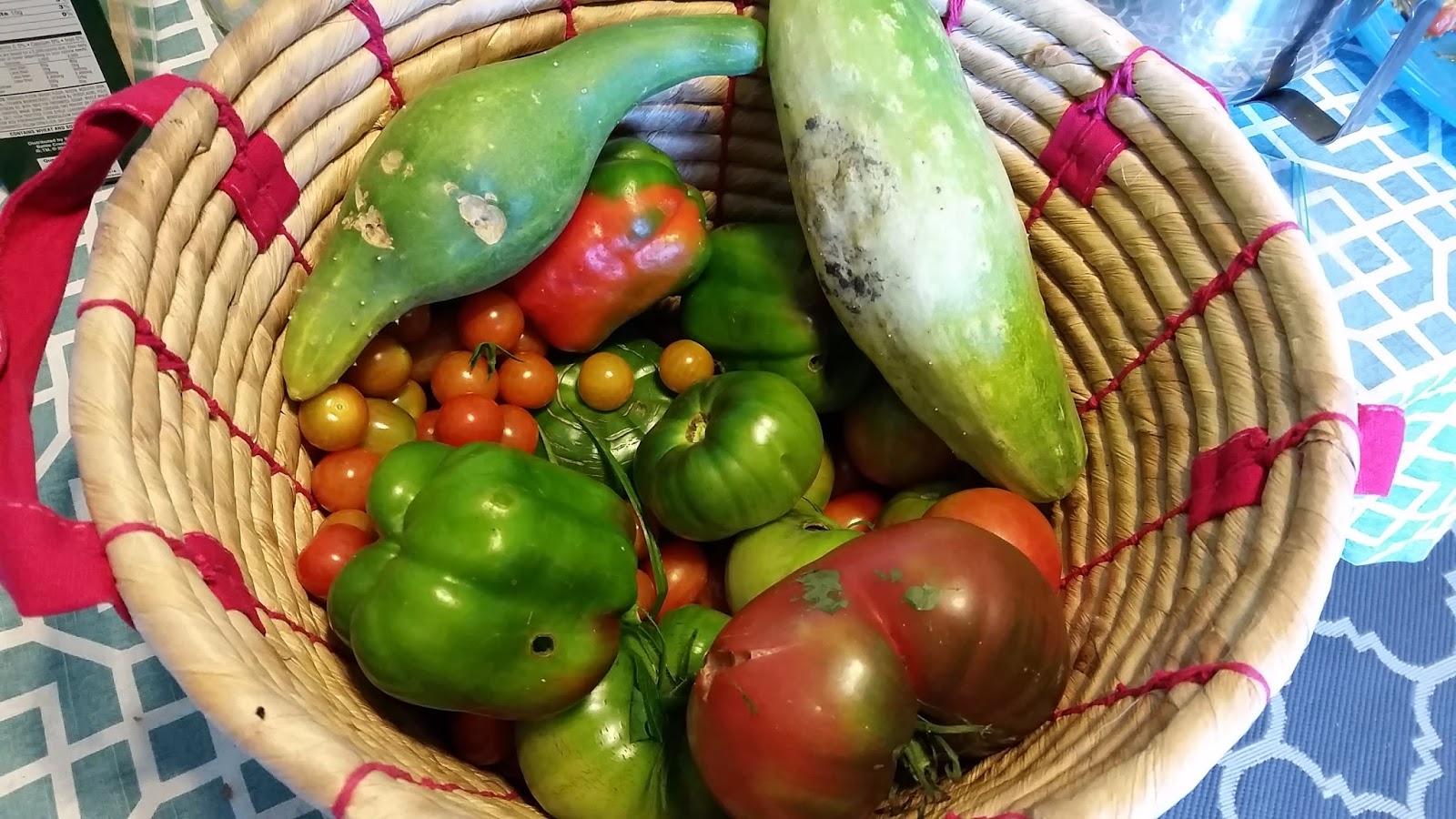 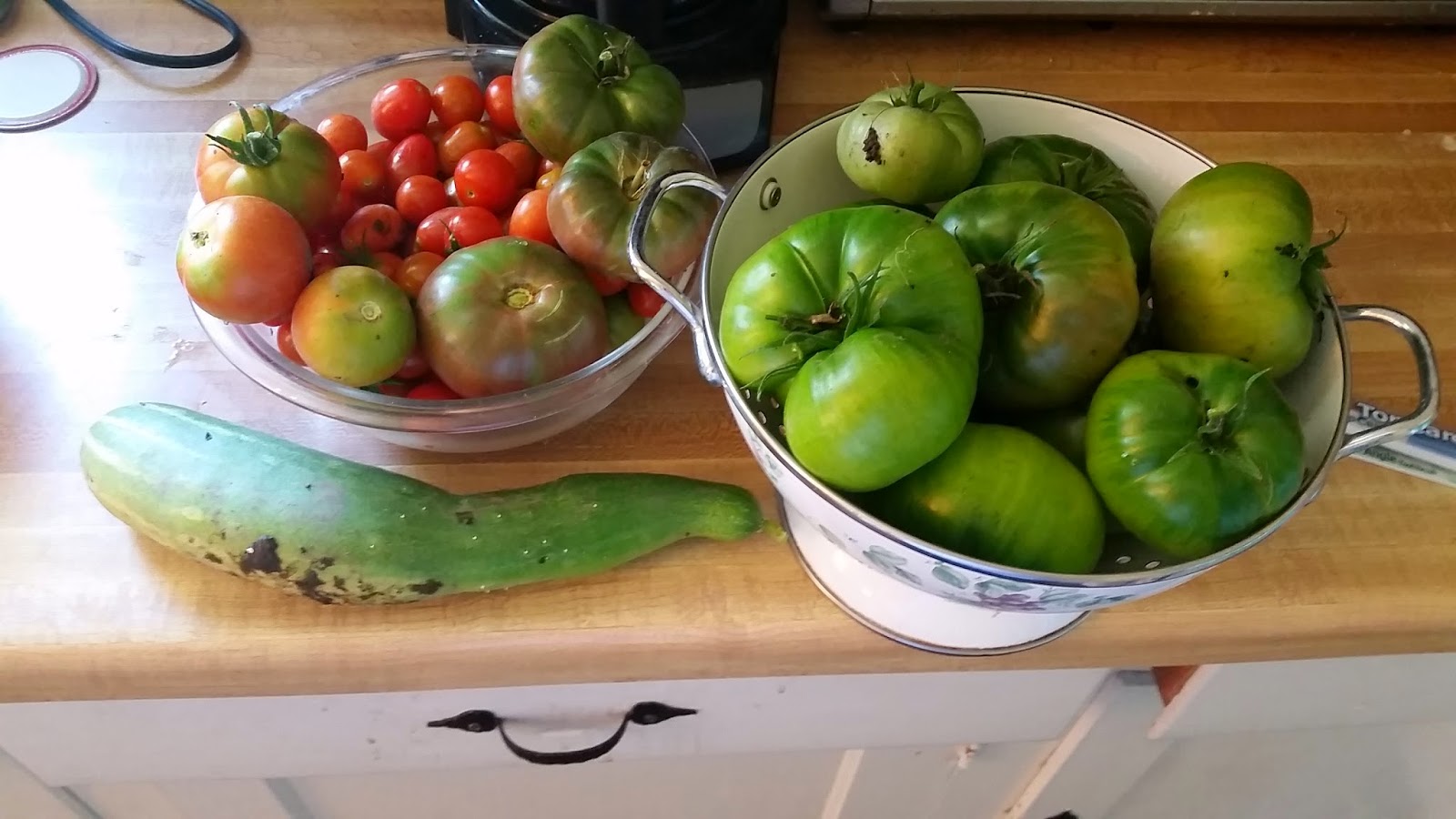 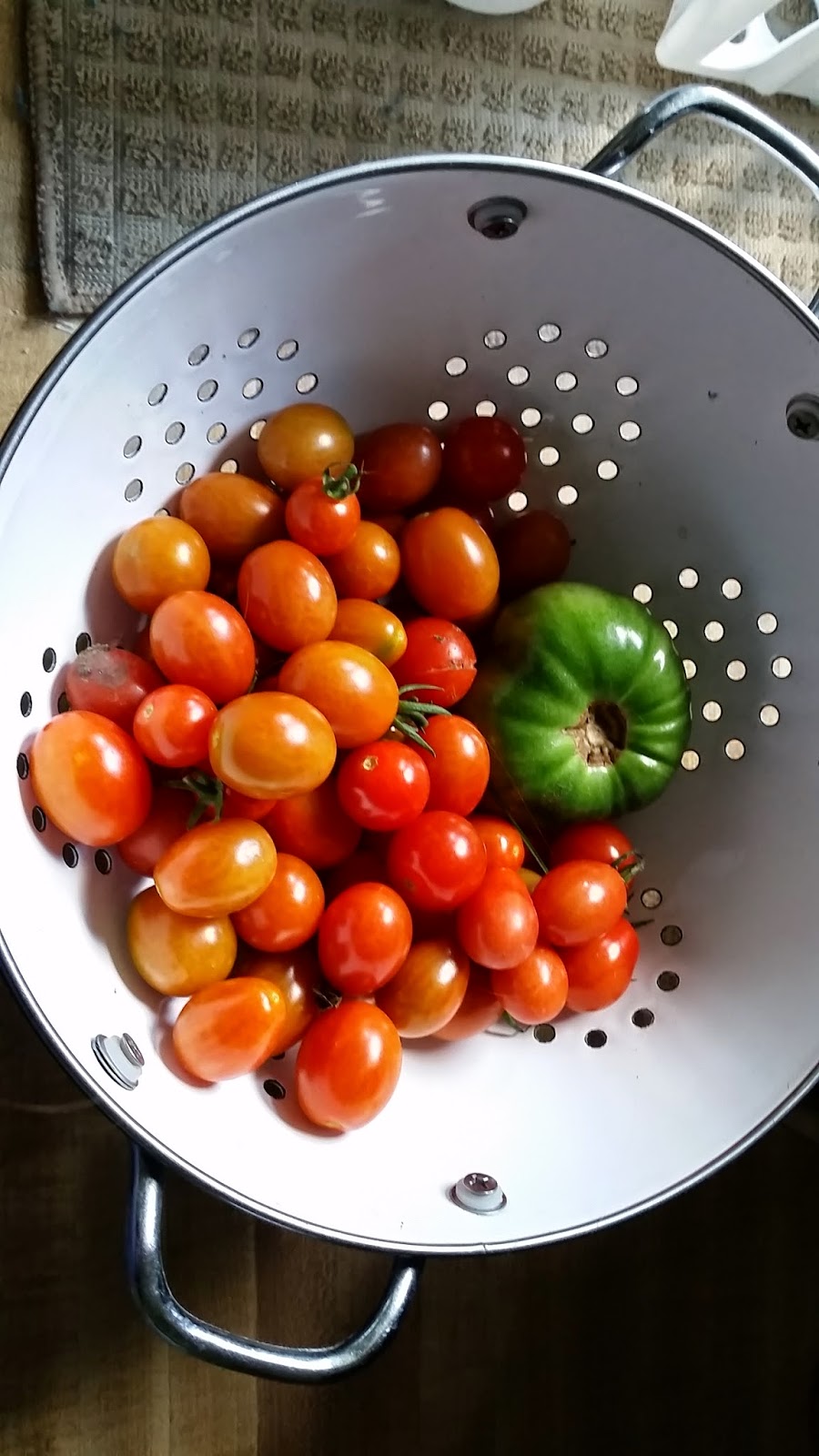 Here are some things we ate with our homegrown bounty:

Most of the big heirloom tomatoes went to fresh tomato sandwiches.  I would toast french bread, spread some mayo, sprinkle salt and grind on some pepper, and then put on fresh tomato slices.  Heaven: 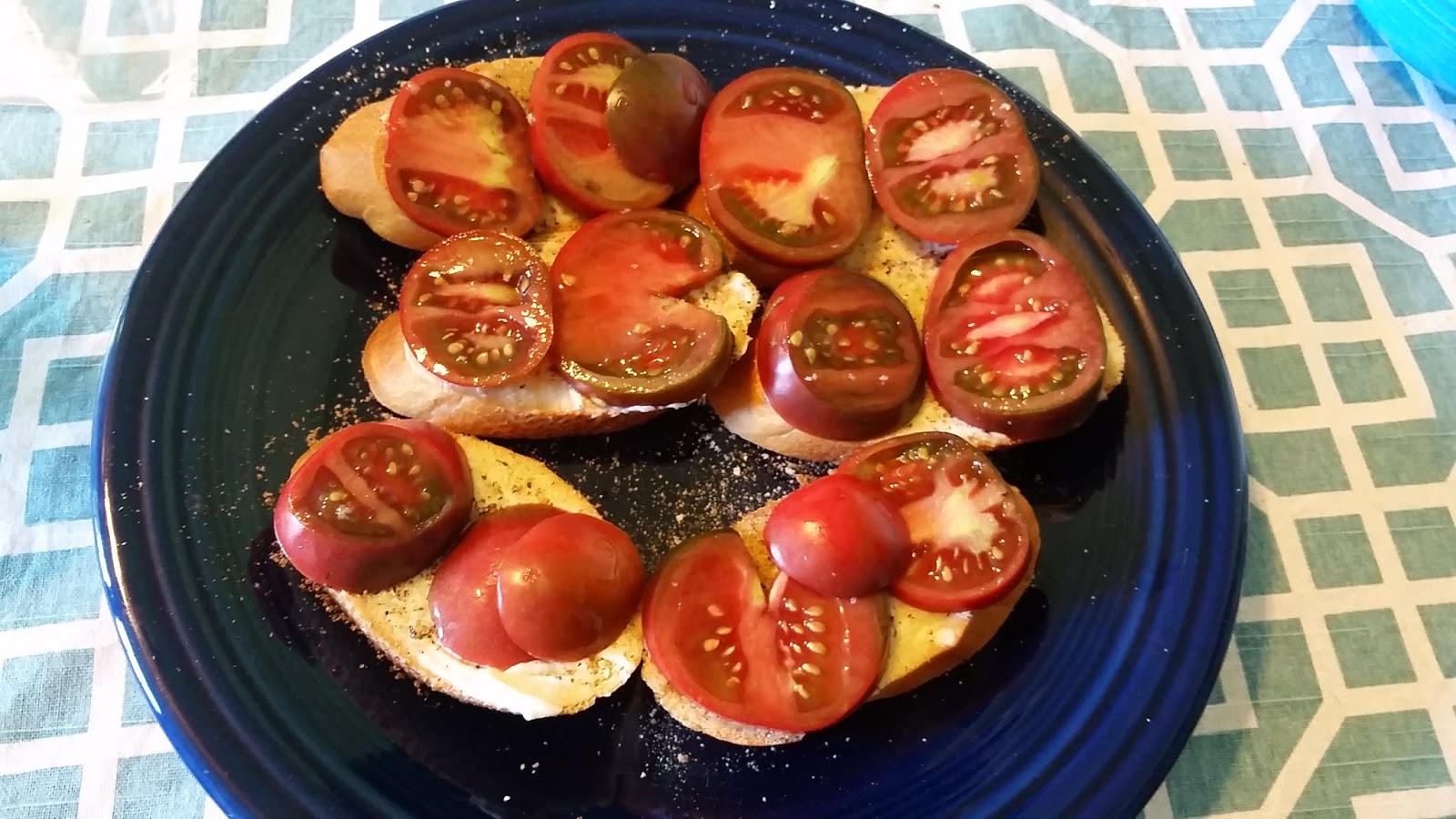 The grape tomatoes went to caprese salads with homegrown basil (grown in the front yard not the food garden): 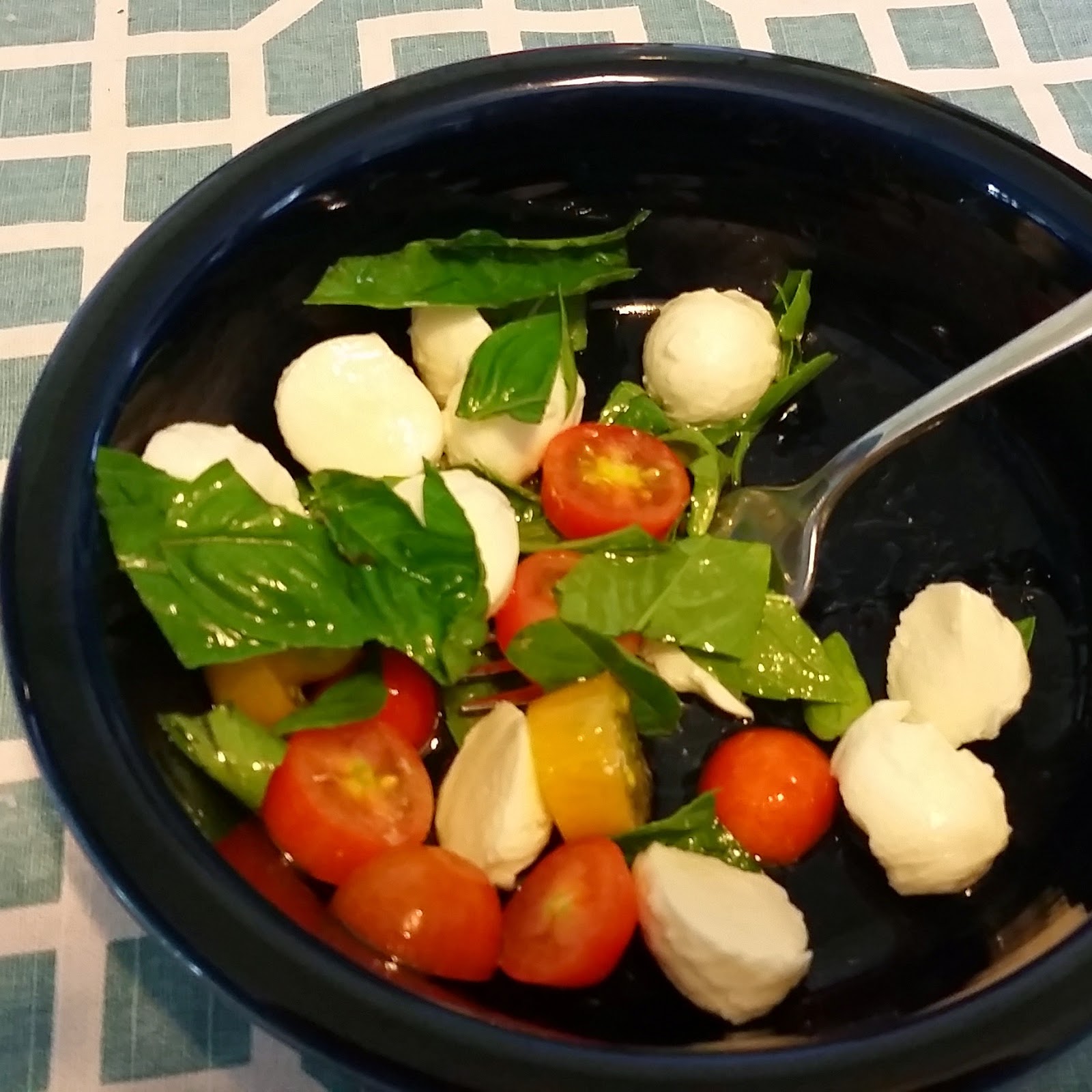 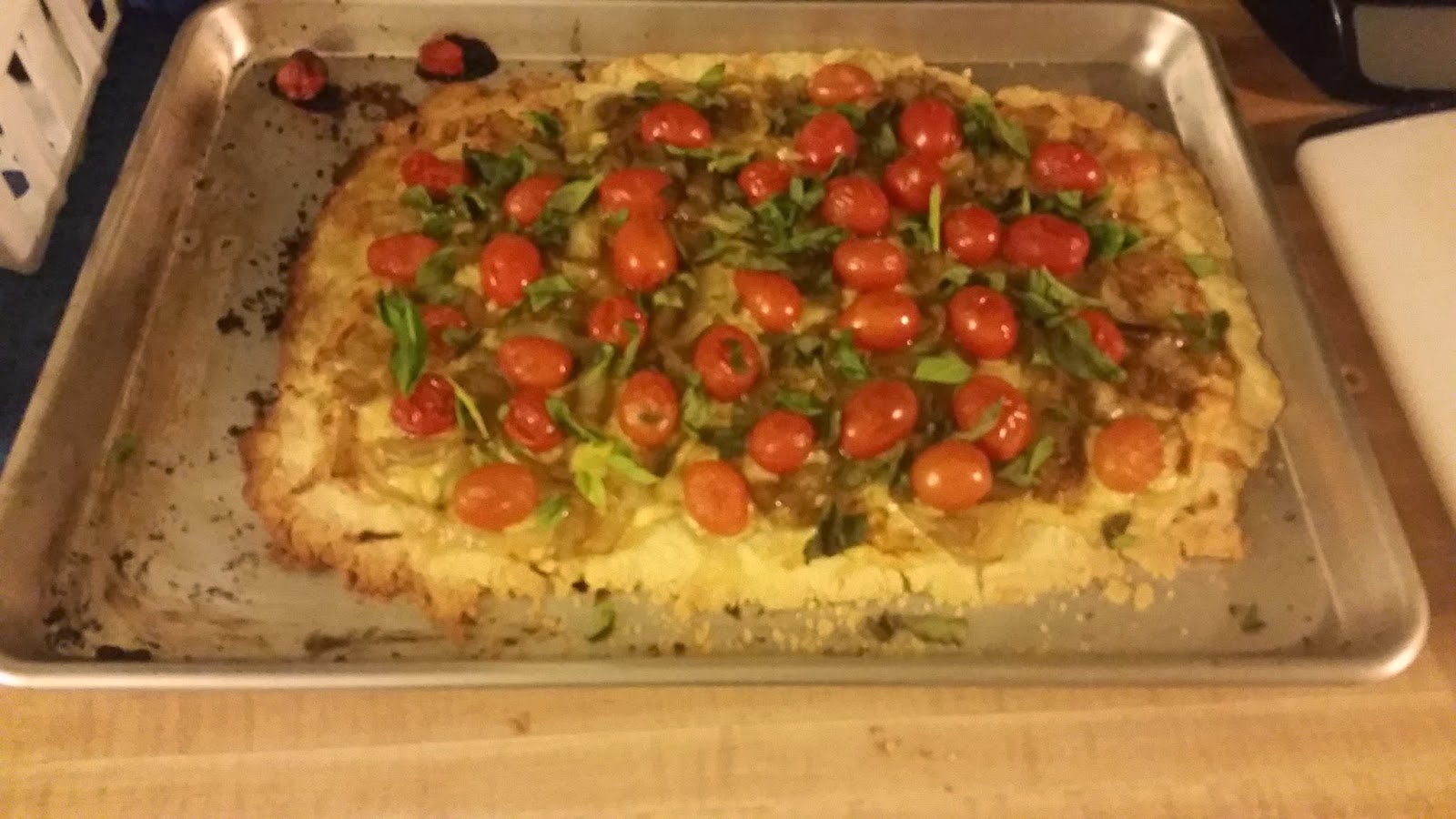 And most got roasted in the oven and tossed into many a pasta dish: 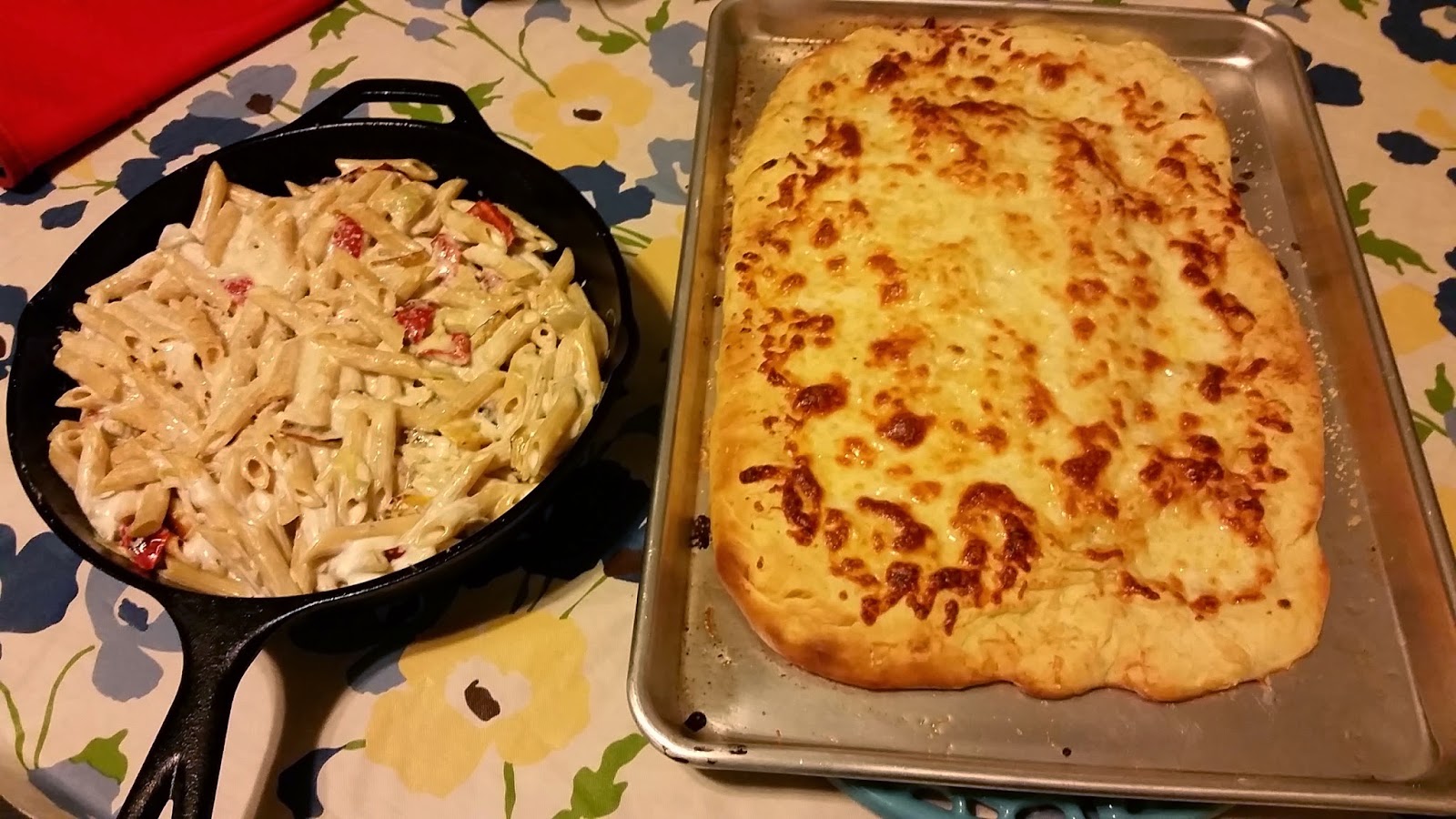 Almost all the medium sized tomatoes are going towards homemade pizza sauce that I haven't made yet.  I am planning to can the batch that I make!  I've got the last few heirloom tomatoes going to that recipe as well to help deepen the flavor.  They are hulled, halved, and frozen waiting to be sauced.  I am going to use this recipe, but I only have 6lbs so far so I'll have the third-it.  I am hoping a few more tomatoes will ripen before the first frost so I can have 7lbs.

Almost all the cucumbers got sliced up and eaten with just some salt.

And the squashes just got harvested last week.  So far I have used 2 butternuts.  One got turned into heavenly soup and the other into pumpkin pie, but I used butternut instead of pumpkin.  The soup recipe will be its own post coming up soon!  Zucchini recipes will also be coming up as a separate post.
Posted by Crafty Lady at 2:54 PM

Email ThisBlogThis!Share to TwitterShare to FacebookShare to Pinterest
Labels: garden2014