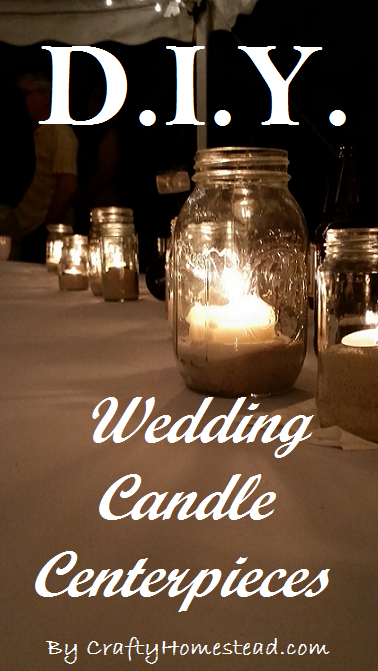 Two days before the wedding two of my good friends helped me with what I like to call the "decorate-y details."  This entailed making 200 jars of candles, cutesying up the favors, making the pie signs, and building the pie servers.  These were all the wedding projects we did.  I did not want to go crazy so there were no cut flowers, centerpieces, chair covers, cutesy banners, etc.

As with most "DIY" projects, it is not just yourself. You need the help of family and friends to make a DIY wedding happen.

My brother's girlfriend took upon herself the job of tracking down the mason jars for the candles.  It took her months and she got great bargains.  This would have been a much more expensive project if it weren't for her, because I would have just had to buy them new because I didn't have the time.  Wyatt I appreciate you!

Assembling was easy, but time consuming due to the amount we needed.  We had 20 tables and I though 10 per table would look filled, but not take up too much room.  I bought play sand at Home Depot and Corey got the candles at IKEA.  Then it was just a matter of pouring in some sand and placing the candle in.  I think the technique my friends went with was put in some sand as a base, put the candle in, and then pour some more sand in to help settle the candle. 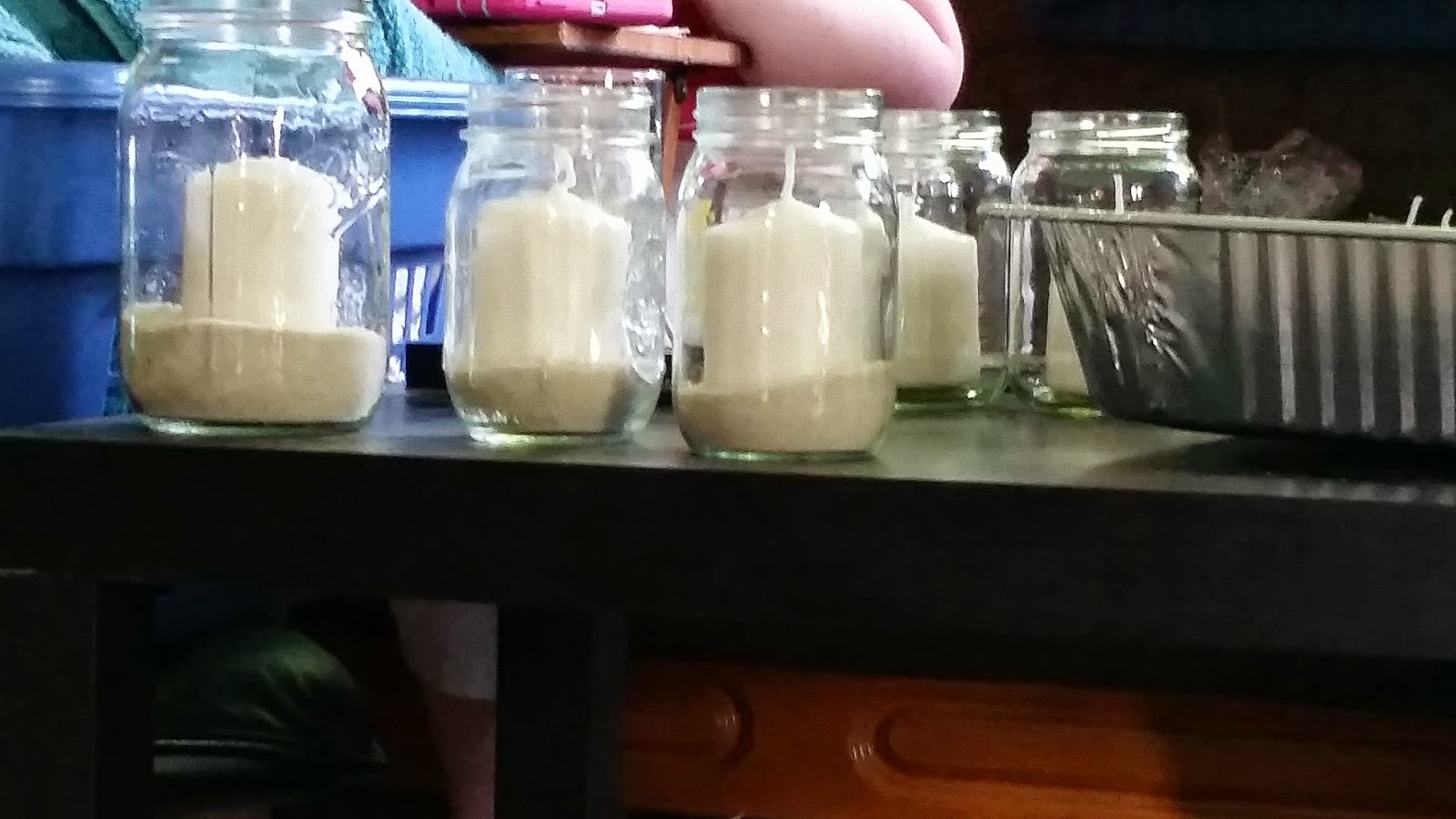 We did not having any wedding colors.  If I had to pick a theme it was "lights and candles."  Here are the candles in action! 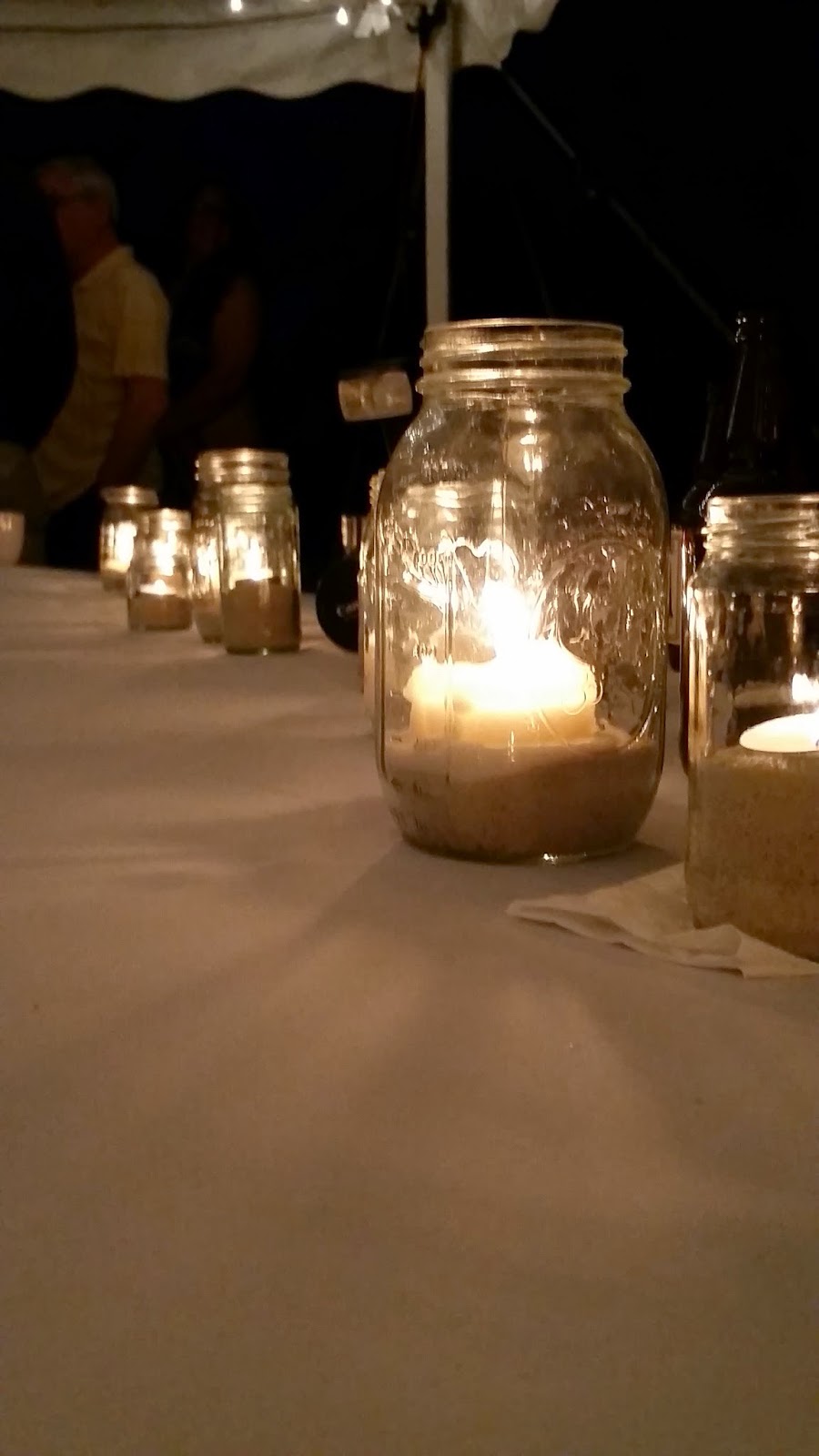 Here is a wider shot that also shows the beautiful lights!  Corey and his brother did this with Christmas lights, extension cords, and amazing ingenuity.  I am blown away at how perfectly they were able to do it!  This is better than I had pictured!  I walked out the night before to see how they had set the lights up and gave the greatest compliment of all, "It looks like Pinterest!" 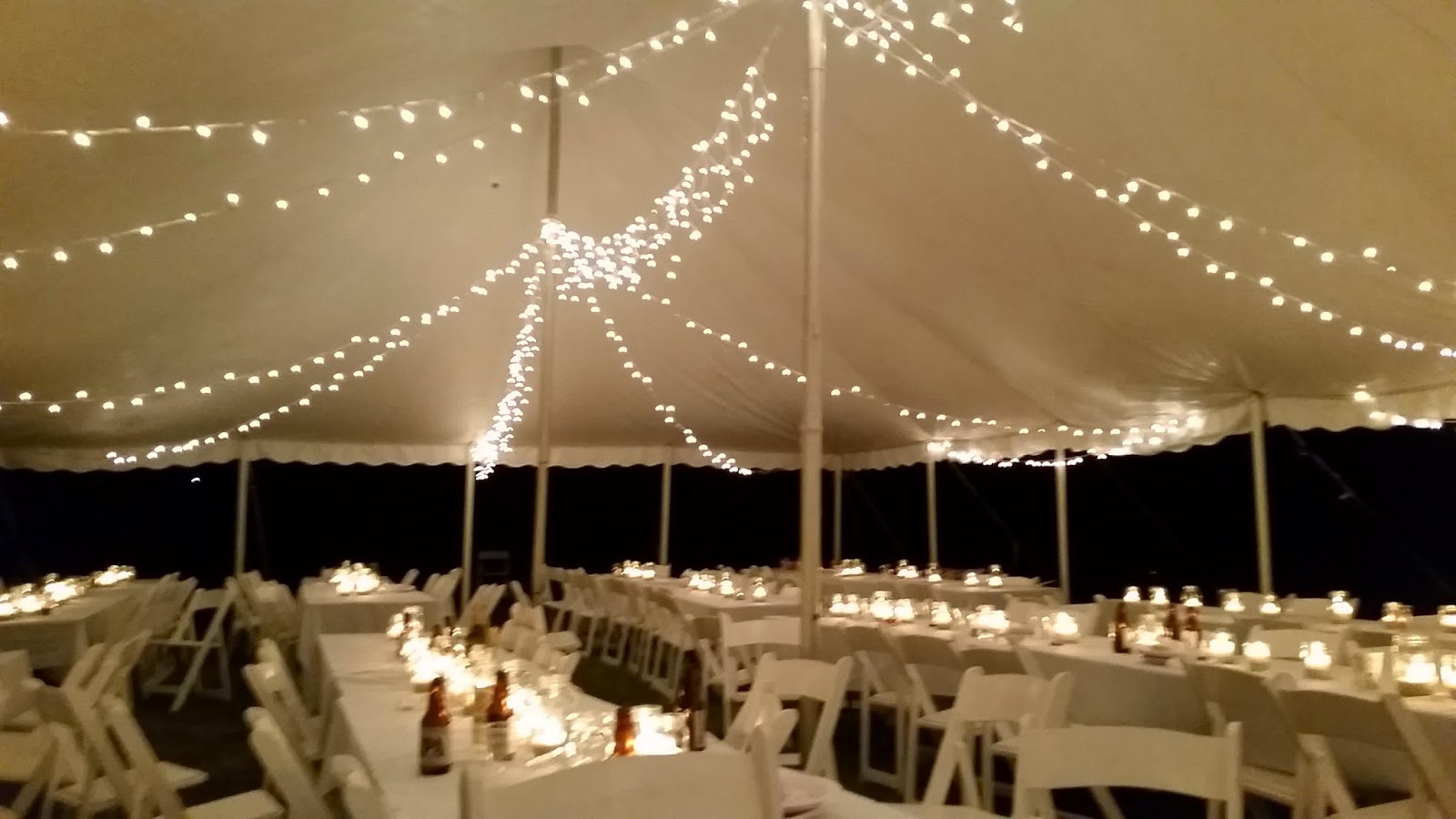 And I worked on the pie servers.  We had wanted pies at our wedding instead of wedding cake because Corey and I aren't cake people (though we did serve Boston Cream Pie for those who are cake-inclined).  At my cousin's wedding they had cupcakes and I loved how easy that was.  No having to cut & serve, no forks or plates!  So then the idea transformed into tiny pies!  They were hard to track down.  We ended up finding them at my father-in-law's favorite bakery, Jarosch Bakery.  And my good friend/sister-in-law made the pumpkin pies because the bakery only makes them in October and pumpkin is Corey's favorite pie.  I knew 200 pies wouldn't fit that well on the table and I thought going vertical would help.  I bought plates and candlesticks at Goodwill and used two tubes of Duco Cement which is a strong glue that's good for ceramics.  The pictures are self-explanatory: 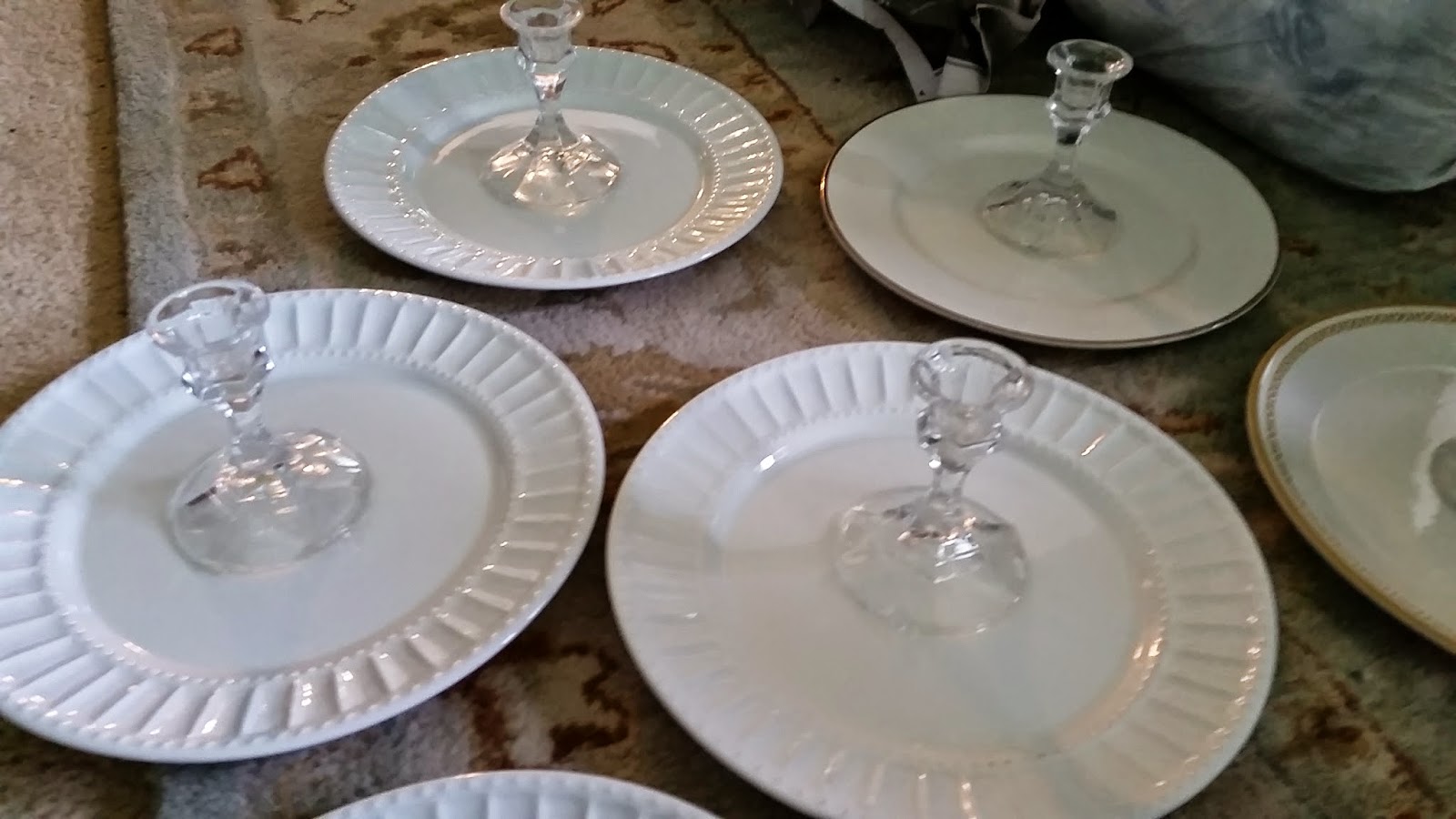 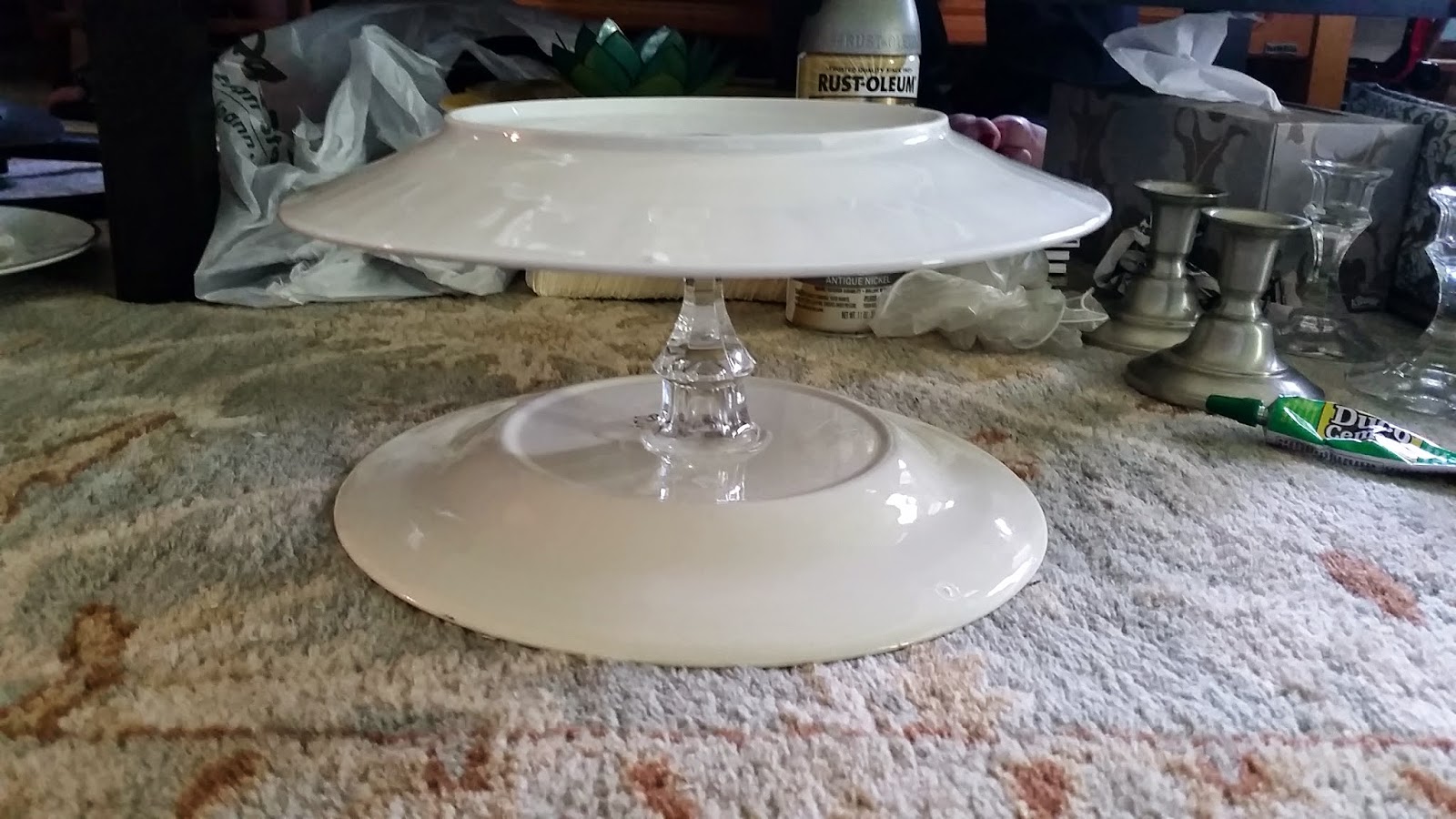 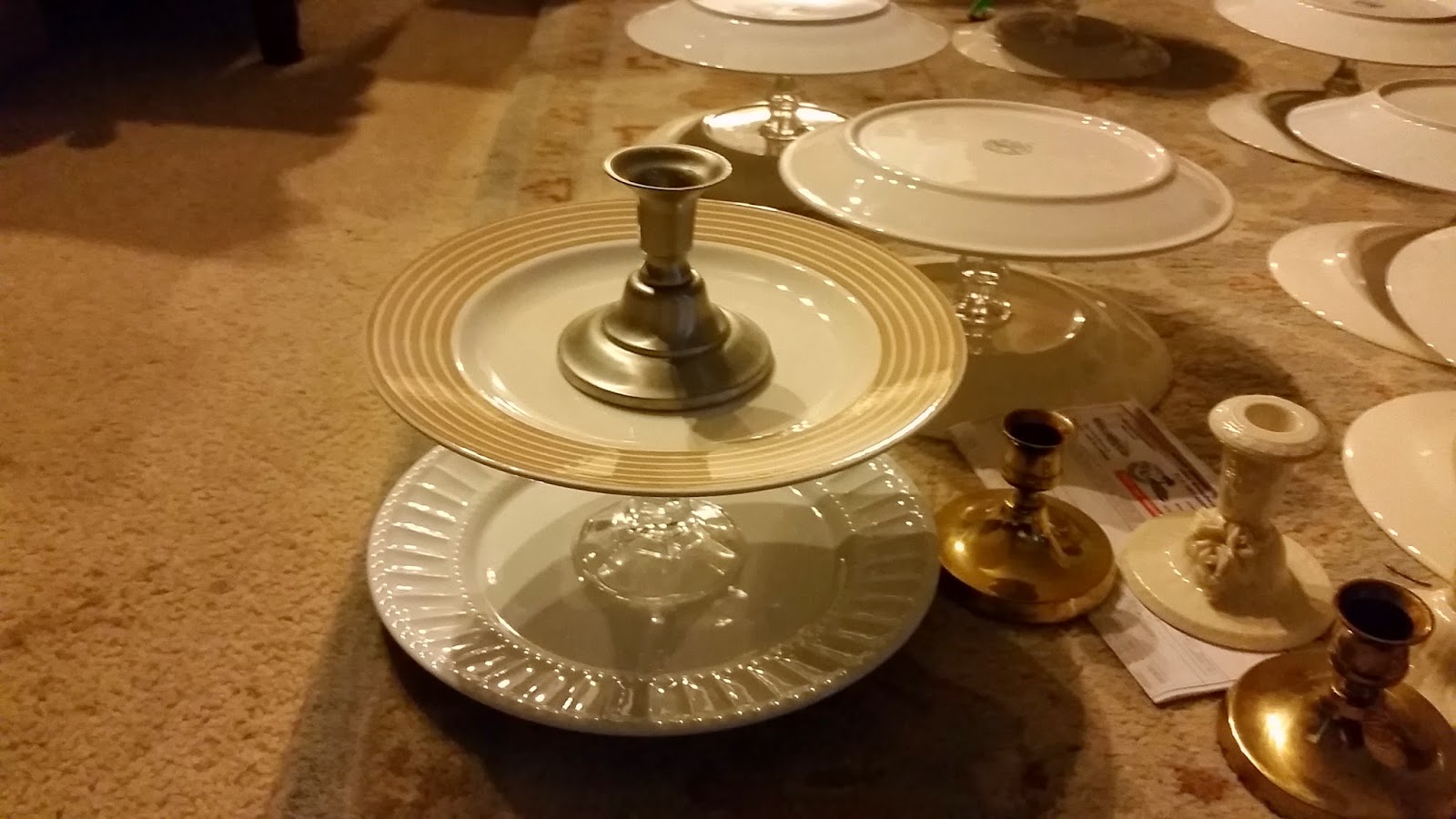 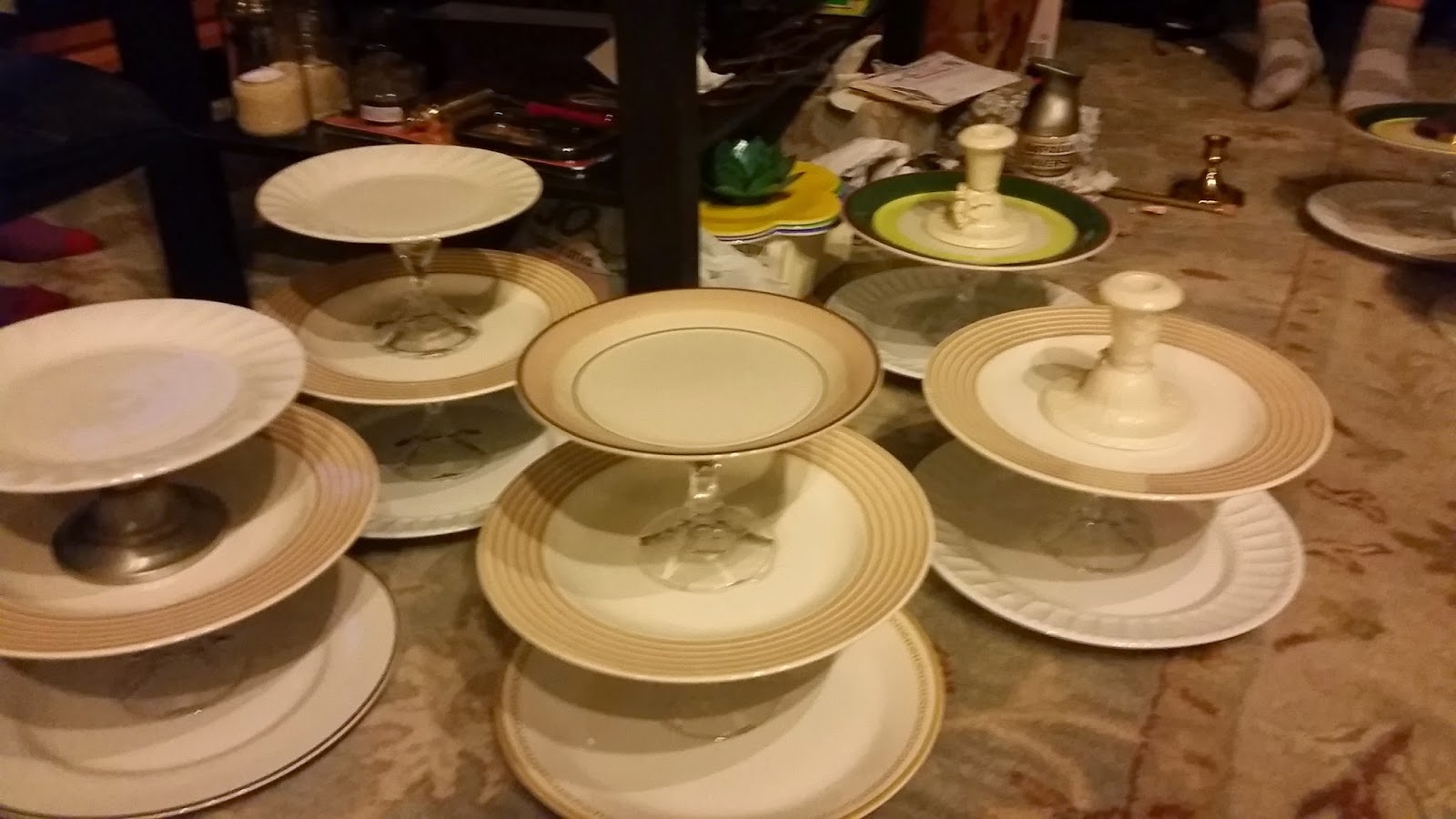 And to help mask the fact that the plates and candlesticks didn't match I then spraypainted the pie towers.  Here is the primer going on: 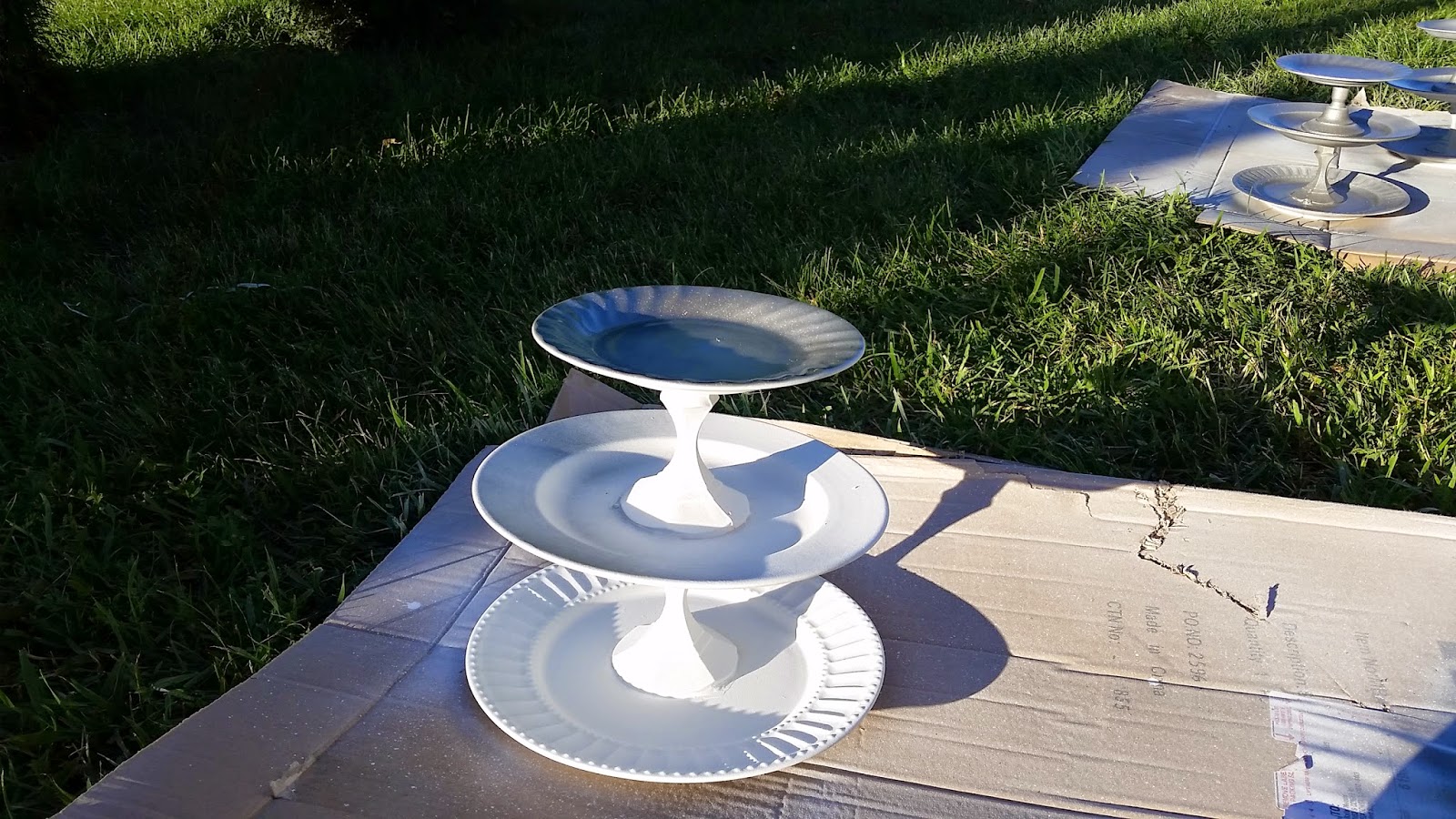 And the silver spraypaint: 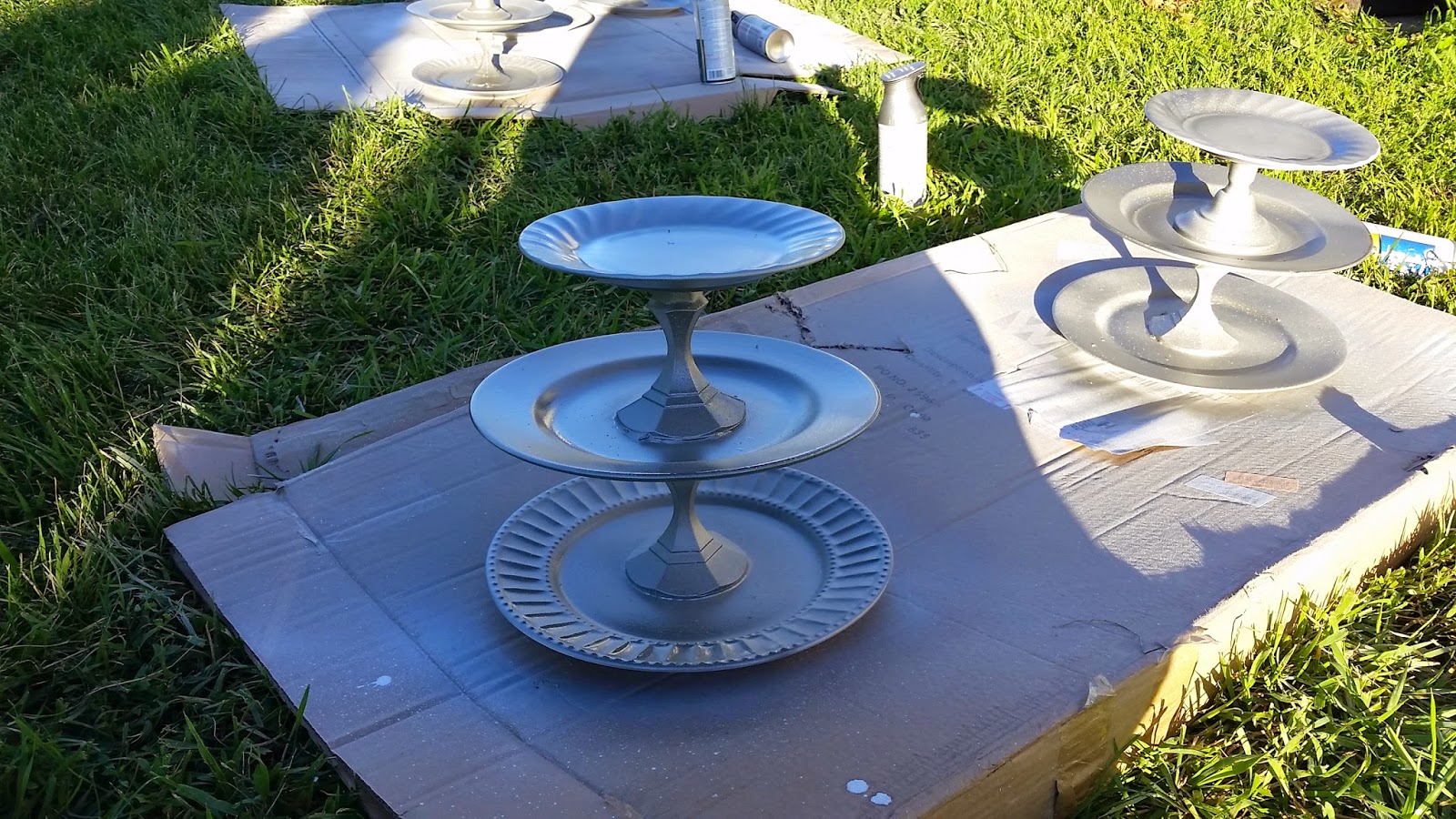 They did not hold up well.  Two broke during the drying process so I sprayed the last two the morning of the wedding before I left to get my nails done.  Funny story:  The manicurist could not believe I was getting married that day!  She said everyone comes the day before.  I told her if I had come the day before my nails would've been covered in spraypaint on my wedding day :)

During the carrying out process more towers broke, but we still used them and made do.  Here's the dessert table: 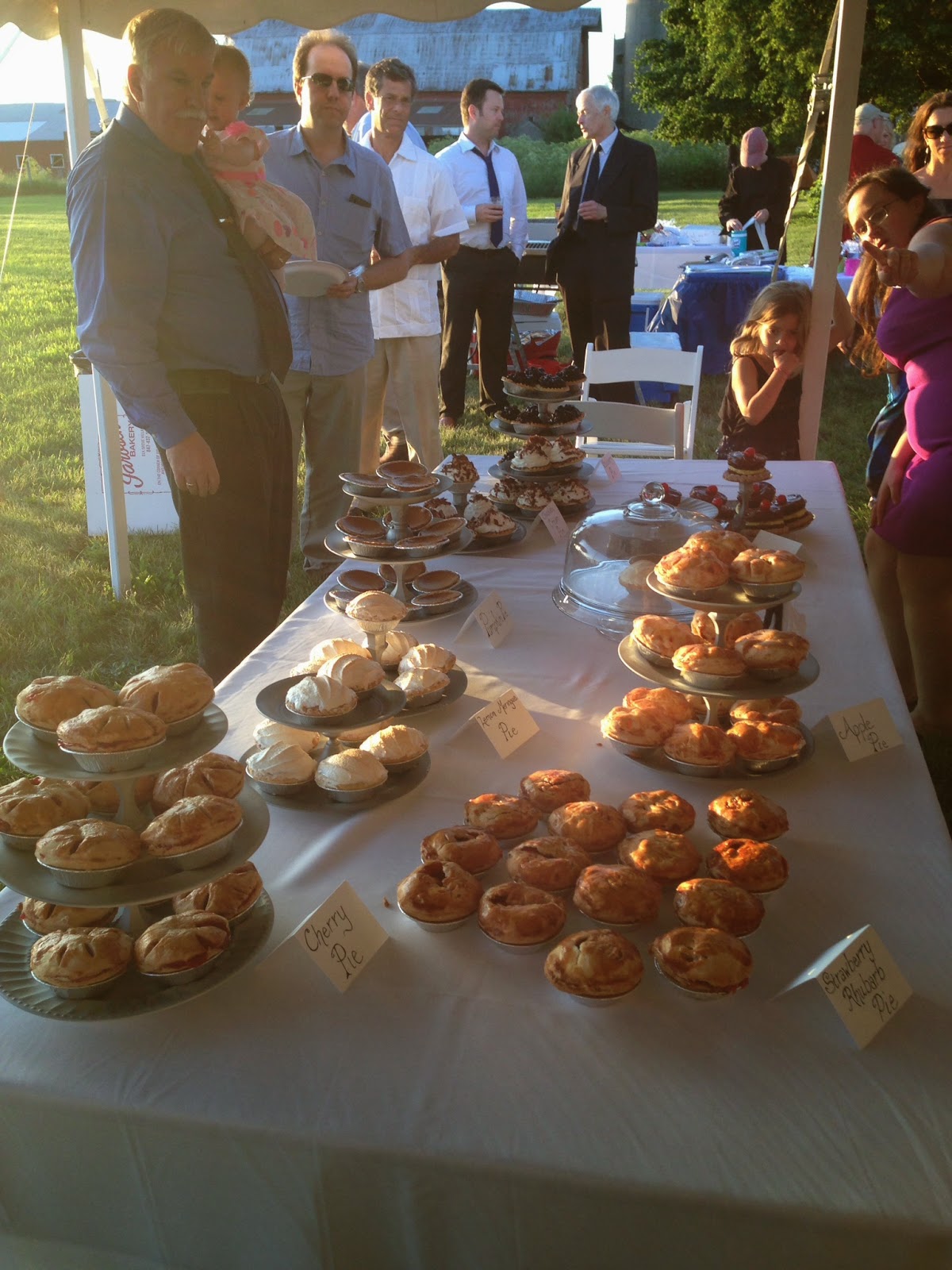 Here's a nice close-up that also shows the beautiful signs my sister-in-law made: 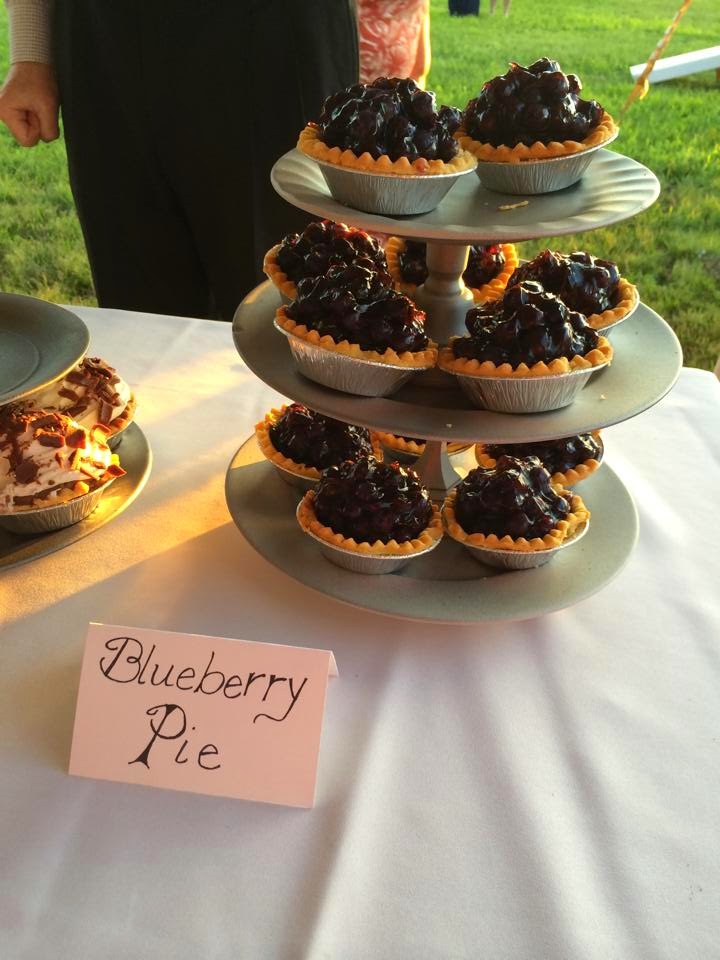 My friend also put the sticker labels on the top of the jars of favors and tied twine & a food label onto the jars that day.  My sister-in-law wrote out all the labels so people would know what they were picking.  Another simple yet tedious time consuming project.  I didn't take any pictures of the process and just looked through all the wedding pictures and no one got a picture of the favors set out!  I had made and canned mixed berry jam, chocolate raspberry sauce, and apple butter.  And I made granola and put it into jars (they weren't preserved).  I used 100 jelly jars.  Corey designed the label to match our Save the Date, invitation, and thank yous.  Then my mom printed it on these labels meant for jar lids.  I do have a picture of an empty jar that Corey's parents gave back to us though: 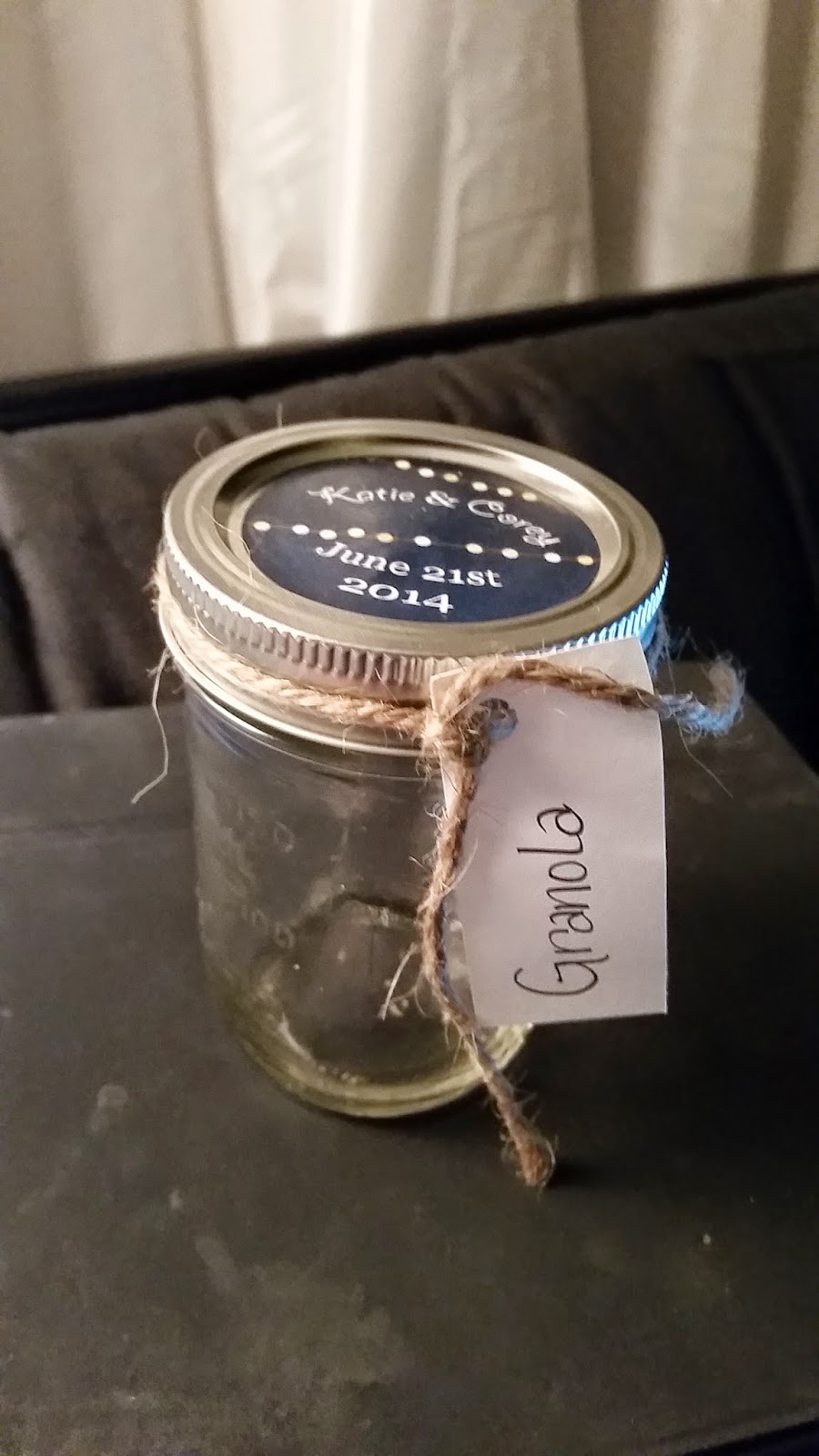 So if you want to have a DIY wedding I totally endorse you to make your own favors, have candle centerpieces, and tiny wedding pies. Just keep it reasonable and realize your limits.

I'll be back Friday with a post on our DIY wedding food. Yes!  You can make your own wedding food!
Posted by Crafty Lady at 12:19 AM