All the Weight References From Love Actually & My Musings 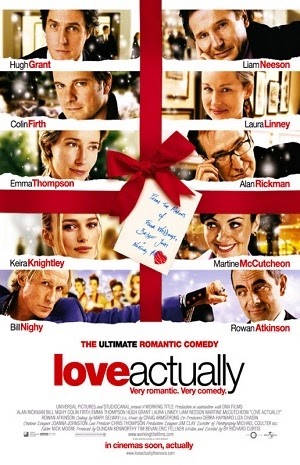 I love the movie Love Actually and I watch it every year at Christmas.  But, every time I watch it something very particular bothers me.  They talk about weight so often and it seems off and unnecessary to me.  So I googled trying to find a list of all the weight references in the movie.  I couldn't find one, but I did find an article critiquing the movie as a whole and two responding to that negative article.  So it got my thoughts rumbling around even more and I want to get them out.  But first, here's the list of all the weight references in Love Actually that I compiled from a script I found online.  17 in all:

Weight comes up so often in the movie and it always stands out to me.  It's nice to have them all gathered up.  What is writer & director Richard Curtis's issue with weight and why is he so obsessed???

Moving on to my musings on the movie, here is the negative article I read written by Christopher Orr.

Orr starts off saying that it is "utterly insane" for people to consider this movie a holiday classic and watch it every year.  He claims it is not a Christmas movie because it is "not a movie about peace on Earth and good will toward men (or, for that matter, about what toys Santa will be placing under the tree)."  I agree it's not similar to a A Christmas Story or It's A Wonderful Life, but it's a message of love set around the Christmas season which to me definitely qualifies it as a holiday movie.  Many of the characters are motivated to act because it is Christmas, there are scenes with people Christmas shopping, decorations are up everywhere, there's a work holiday party, a pivotal scene involves opening a Christmas present, and a huge scene is set around the Christmas Eve nativity play.  One of the reasons that I love to watch Love Actually every year is it's a bit different than the rest of the classic movies that I love to watch this time of year and it's refreshing.

Now the author's three main points revolve around him saying the movie is not a romantic comedy, but is an anti-romantic movie.

I know that this movie is classified as a romantic comedy everywhere (even on the poster), because out of all the movie genres it fits best in that one.  But to me this is not meant to be a romantic comedy and I don't understand why this movie critic is so adamant that it completely fit into that umbrella.  Yes, it is funny.  Yes, there is romance.  However, to me it is a movie about love, all the different kinds of love there are: romantic, familial, self, unrequited, and lust. Each of the 9 relationships fit into one of those types of love.

The author seems to have a big problem with the storyline on Karen & Harry, the married couple where the husband emotionally cheats on his wife.  He does not like that in the movie they don't show the couple working through the problem and recovering as a couple.  One of his main points in critiquing the movie is "any actual obstacle to romantic fulfillment, however surmountable, is not worth the effort it would require to overcome." But to me that story line is about learning to love yourself.  It is clear throughout the movie that Karen does not feel confident about herself anymore and devotes most of her time to her family.  In the last scene at Heathrow airport you see that Karen has gotten her hair done, is wearing make up, has earrings on, and has put on a nice outfit.  It is not clear in that scene if they have separated or are together, but to me it's about Karen and how she has shown herself love.  The focus is not supposed to be on their marriage at that point.

Orr sees the storyline for Sarah & Karl as a failure as well,  He feels that Sarah's brother is an obstacle in the way of their love that they can't overcome and they just give up on love, another reason he sees it as an "anti-romance" movie.  But to me, she chooses the love for her brother over the love of a lover.  That storyline focuses on a different type of love.  Yes, it's still heart breaking to watch her give up on romance with Karl, but she makes a choice and still chooses love.

In the voiceover intro to the movie it states "love is everywhere. Fathers and sons, mothers and daughters, husbands and wives, boyfriends, girlfriends, old friends"  They are setting you up for a movie about LOVE, not romance.  So the fact that this author keeps going on and on about romance makes me mad.  That is not the point of the movie and they go back to that point during the ending scene as they show people greeting each other in the airport again.  It's all different sorts of loving relationships, not just couples.

Another main point in the article is "love is overwhelmingly a product of physical attraction and requires virtually no verbal communication."  It's a two hour movie with 9 storylines, they have to hit the high points!  He specifically points out how Sarah & Karl don't talk before their love scene.  However, they've been working together for two years, spent the Christmas party together, and he took her home that evening.  I'm sure there were many conversations had in all that time, if only in the cab ride to her apartment.

Physical attraction IS a huge part of romantic love, though.  Being attracted to each other is what makes it romantic love instead of friendly love.  So to me it seems normal that each character is attracted to the other the first time they meet.  That first attraction is what makes you pursue the relationship and have more interactions with that person to see what happen between the two of you.  The author does not like that David likes Natalie "the first time he speaks with her—“Get a grip,” he chides himself moments afterward—when essentially the only thing he knows about her is that she accidentally uses profanity a lot" and he claims that that is the moment David fell in love with her.  David never says he loves Natalie in the movie, though she says she loves him.  I think it is very normal for there to be a spark the first time you meet someone and I don't understand why Orr has such an issue physical attraction in the movie. I know that some relationships develop over time and there isn't always an initial ooooooooo moment, but I don't think it's weird to walk away from meeting someone and have butterflies in your stomach.

Orr even makes the point about there not being enough verbal communication with Joanna & Sam, the kids!  What 9 year old kid talks to their crush?  When you're a kid your crush is based on looks and a few other details and you try to gather as much information on them as you can.  That is just so normal to me that I can't believe he even discusses it in his article, "they’ve never spoken before: All she knows about him is that he plays the drums (poorly) and that he has very little respect for airport security."

By the end of this article I was convinced that this movie critic wanted a mini-series and not a movie. His closing point is the "fundamental problem with Love Actually is that it presents romance as either absurdly easy—something that strikes you like a thunderclap and requires only a single grand gesture in order to be fulfilled—or all but impossible."    IT IS A MOVIE AND NOT REAL LIFE!  Plus most romantic movies are about one couple so the movie is about their ups and downs and finding each other.  Love Actually covers 9 couples and so there isn't time to go into the details and nuances and show every conversation in each relationship.  And the romantic love in this movie is all in the beginning stages, they're about the falling in love part.  You don't know if all the relationships will stand the test of time, but you do know that they've met and fallen in love.  All of the characters spend time together and have multiple scenes together in the movie before any grand gestures are made.

I see so much romance in this supposed "anti-romance" movie.  How adorable are Jack and Judy?  They're shy, but they talk and have a great rapport with each other.  She says "all I want for Christmas, is, YOU!" and Jack jumps off her steps with a happy shout after their first real date.  Even before Jamie & Aurelia learn each other's languages they are so in tune with each other, unknowingly having great conversation in two different languages.  Then he proposes with a big romantic gesture (admitting that it's crazy).  David & Natalie flirt back and forth, she writes him a romantic Christmas card, and he goes off on a romantic quest to find her on Christmas Eve.  The author of the article does not seem to like that they kiss before going out on a real date, which to me just makes the author a real prude.  The other storylines aren't romantic, but they're not meant to be.  Those other characters are exploring love beyond romantic love.